Question: I’m confused by the “left turn yield on green”. Who is supposed to turn first when the light turns green?

Answer: I can see how this could be a little confusing for a new driver. This sign is most often posted where there is a combination of both a left turn arrow and a standard traffic light as in the photo above. It allows traffic to turn during those periods when the green turn arrow isn’t working.

If you’re in the left turn lane facing a standard, round green light with the “left turn yield on green” sign posted, you must wait or “yield” until the opposite lane is clear or there is a wide enough gap in the oncoming traffic to give you enough clear space to make a turn. If the left turn arrow isn’t working and traffic is heavy in the other lane, you may have to wait through the red light until the next green light before traffic is light enough to allow you enough clear space to turn left.

Question: What is the two-second rule?

Answer: The two-second rule is the rule most states have adopted to keep a safe following distance between your vehicle and the vehicle ahead. It’s the most simple way to know if you’re following another vehicle too closely or not.

To keep a safe following distance, some older drivers were taught, and still hold to the rule, of keeping a distance of one car length for every 10 mph you’re traveling. In other words, if you’re traveling at 40 mph, you should keep a distance of at least four car lengths between you and the vehicle ahead. Some parents may still be teaching that rule to their teen driver but the rule doesn’t work very well. The main reason it doesn’t work is that it’s hard for most people to visually determine a car length. What exactly is a car length? Are you talking about a 1972 Ford station wagon or a VW Beetle? For those of us who may be math challenged, the math just gets too complicated.

The two-second rule is much simpler. When the car ahead passes a line or a shadow in the road, start counting “one-thousand-one, one-thousand-two.” If you get to that spot in the road before you’re finished counting, you’re following too close. You need to back off a bit until you’re no less than two-seconds behind the vehicle ahead. The great thing about the two-second rule is that it works whether you’re traveling at 10 mph in rush hour traffic or at 70 mph on the interstate.

Your reaction to an emergency ahead takes time. If the vehicle ahead should suddenly stop, it can take up to three-quarters of a second before you’re even aware that it has stopped. Then you need time to decide what to do; should you slam on the brakes or should you try to swerve into another lane to avoid it? If you want to move over into another lane, are there any other vehicles in the way? The decision-making process takes time. Once you have decided what to do, you have to put your plan into action. If you decide to slam on the brakes, you have to move your foot from the gas pedal over and fully depress the brake pedal and that takes even more time. Once you hit the brakes, it will still take time before your vehicle can come to a full stop.

On average, it can take from up to one and a half seconds from the time the emergency starts until you fully react and put your escape plan into action. That’s known as the “reaction time.” One and a half seconds may not seem like a long time but remember, if you’re traveling at 40 mph, your vehicle will travel almost 60 feet in that amount of time. That’s a long way! When you add the distance after you hit the brakes until you come to a complete stop, you have the “total braking time.” The distance adds up!

The two-second rule provides the minimum distance to give you enough time to react and take action if something should happen ahead. Three or more seconds is even better and some states require at least a three-second distance. If it’s raining or if you’re following behind a motorcycle, you should keep a four second distance. In the rain, the roads may be slippery and you need the extra distance in case your vehicle starts to skid. You need to keep a longer distance behind motorcycles because they can stop so much more quickly than a larger, heavier vehicle and you’ll need more distance to react if something happens ahead.

Question: What are the rules for making a right turn on red?

Answer: There are several rules and things that you must watch for when making a right turn on red.

The first and most important rule – and this is the law in all 50 states – you must come to a complete stop at the red light before making a right turn on red. Failing to obey this law gets a lot of drivers in trouble either through involvement in a crash, or by receiving a ticket for running a red light. Many drivers, at intersections where red light cameras are installed, receive a ticket for running a red light because they seem to have forgotten this law and make a “rolling right on red.” Red means stop!

Making a right turn on red isn’t allowed at every intersection. If a “No Right Turn On Red” sign is posted, it’s illegal to turn. Sometimes, when the oncoming lane has a left turn light, an electric “No Right On Red” sign will light up. It’s your duty as a driver to be aware of all signs.

Other intersections may have a red right turn arrow. Just like a red light, a red right turn arrow means you must stop. However, in some states, Florida included, it’s legal to turn right on a red arrow after you’ve come to a complete stop unless there’s another sign posted that says “No Right On Red.” If you’re unsure of what the law is in your state, check your driving manual or, to be safe, remain stopped until you get a green arrow.

There are a lot of good reasons why you must come to a complete stop before making a right turn. Intersections can be a dangerous place and most crashes in the US happen at intersections. When you stop at a red light, before turning right, check for;

You’re only allowed to turn right on red if the way is completely clear of all pedestrians and other traffic. Don’t allow yourself to get in the habit of a rolling right turn on red.

Question: Are Graduated Driving Laws the same in every state?

Answer: Most states have some form of Graduated Driving License (GDL) law but they aren’t all the same.

GDL laws are designed to give new teen drivers more practice in a safer driving environment before granting them full driving privileges. According to the Insurance Institute for Highway Safety (IIHS), the best GDL laws do this by:

Many states ban other teen passengers for six months to a year because teen passengers can be very distracting and your chances of being involved in a crash are up to four times higher with another teen in the car.

In addition to the above, many states also include a total ban on all cellphone use while driving.

As you probably already realize, your state’s GDL law probably doesn’t include all of these requirements. For instance, in California, the GDL law requires:

That’s it! There are no other restrictions.

As you can see, GDL laws are not the same in every state. However, as a teen, if you travel to another state, you’re subject to that state’s GDL laws so it’s a good idea to check out the GDL laws in the states that you may be traveling to.

No matter what the laws in your state may be, you and your parents can choose to include all of the restrictions recommended by the IIHS in your “teen/parent driving contract”. As a teen, you may not be crazy about that idea but it’s for your own safety. Studies have shown that, in the states with the strictest GDL laws, the teen death rates have gone down significantly.

Question: When making a left turn at an intersection, can you end the turn in any lane?

Florida law is a little different from most states. Under Florida law, you must still make a right turn from the right lane into the right lane. However, when making a left turn, you may turn into “any lane lawfully available, or safe for the desired direction of travel.”

Let’s look at a scenario where it would be legal to turn left into any “lawfully available, safe” open lane. Let’s say, as soon as you turn left, you need to make a right turn into a parking lot. In that case, under Florida law, it would be legal to turn left into the far right lane as long as – and this is important – the far right lane is clear of traffic and you can safely move into that lane. If there is traffic in the lane you want to move into, you must move into the safest available lane and then move into your desired lane as soon as it’s safe to do so.

Unless you need to turn again, after making a left turn, the safest and smartest thing to do is to turn from the left lane into the left lane. Afterwards, if you need to move over into another lane, you should signal for a lane change, check to see if the lane is clear, and then move over. Remember that, under Florida law, you must use your turn signal whenever you are making a turn or when changing lanes. 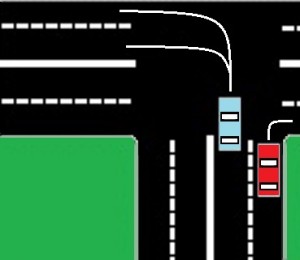