The Best Kept Secret That Could Protect Your Baby

Most parents of a newborn child would do anything they could to protect that child from harm but there’s one critically important safety device that seems to be a well kept secret for most new parents.

In 2014, the American Academy of Pediatrics conducted a study of new parents who were taking their newborn child home from the hospital. The study showed that 93 percent of new parents made at least one critical error in placing or attaching their infant car seat for the first time.

Most new parents seem to know about using the seat belt to secure an infant car seat but, it seems that very few know about or use their vehicle’s LATCH (Lower Anchors and Tethers for Children) system. The LATCH system has been required on all infant child seats and motor vehicles manufactured after September 1, 2002. While the LATCH system may be there, it’s often difficult for parents to find and use.

The LATCH system consists of tether points (as in the photo above) located both on the seat itself and, for forward facing child seats, behind the rear seat. Latches built into the infant seat or seat base are designed to hook onto the anchor points located between the seat cushions. 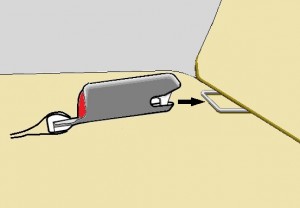 These tethers, once they are latched and tightened, are extremely effective in holding the child seat securely in place during a crash.

When your child is old enough for a front-facing child protective seat, there’s an additional tether to prevent the top of the seat from flying forward in a crash. The point that it tethers to depends on the type of vehicle you have. 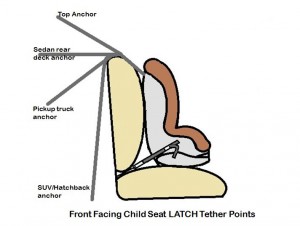 Another thing that seems to be a secret is that car seats have expiration dates. Plastic seat components exposed to the sun and heat in the interior of a car over long periods can start to break down and weaken. The expiration date is marked on the bottom of the seat. If a previously used seat is near or past its expiration date, dispose of it. Don’t be tempted to sell it at a garage sale where it could endanger another child.

If you’re in the market for a new car, the Insurance Institute for Highway Safety (IIHS) has information on the safest cars and those cars with the easiest to use LATCH systems.

Be sure to register your new car seat in case problems arise that require a recall. To check whether or not your car seat has been recalled, visit: Get Car Seat Recall Notices

For the sake of your child, and others, don’t let the proper use of child seat systems remain a secret; spread the word. For more information visit: Lower Anchors and Tethers for Children (LATCH) Restraint System