Ask The Traffic School Instructor: Do Pedestrians Always Have The Right-Of-Way?

Question: I was attending a work related safety training session and the instructor said that, in Florida, pedestrians don’t have the right of way. Is that true?

Answer: For the most part, no, it isn’t true but it depends on the circumstances.

Let’s look first at what the law requires of pedestrians:

Now let’s look at those times when drivers are required to give up the right-of-way to pedestrians:

If a blind or visually impaired pedestrian, using a white cane or guided by a guide dog, is attempting to cross the street, whether at a crosswalk or not, all traffic in both directions must come to a complete stop.

Watch out for children, especially near schools, parks, and residential zones. Kids are in their own little world and they don’t care what the law says.

The new law requires motorists who are involved in a crash with a vulnerable road user to stop and render aid. Those who fail to do so will face severe penalties.

The lists above don’t include every instance covered under the law, just the basic ones. To see what Florida law says about pedestrians, read: The 2015 Florida Statutes – 316.130 Pedestrians; traffic regulations.— 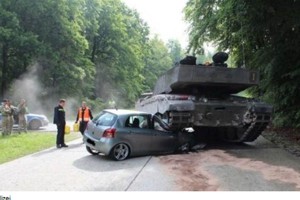 Ask The Traffic School Instructor: Ticket From Another State

Question: If I get a ticket in another state is it reported to my home state?

Answer: In most cases, yes. Not only is it reported but your insurance company will also have access to the records.

Forty three states and the District of Columbia belong to what is known as the Driver’s License Compact. The theme of this compact is “One Driver, One License, One Record.” Most, but not all members of the compact treat the violation as if it happened in your home state. That means that points will be assessed and in the case of serious violations such as DUI or vehicular manslaughter, your license will be suspended or revoked.

As I said, most but not all states treat violations as if they happened in the home state. Some states may consider some reported traffic violations as minor and not assign points. Other states may not only treat the violation as more serious but may apply more points to your record than the reporting state would have. New York treats tickets received in the Canadian provinces of Quebec and Ontario as a New York violation. All states have agreed to suspend your license if you fail to pay the ticket or appear in court in the state that issued the ticket

Even though they don’t officially belong to the compact, states like Georgia, Michigan, and Wisconsin may still report traffic tickets to the home state and accept reports of tickets from other states.

From my own experience as a former driver license examiner for the State of Florida, when someone moves to Florida and wants to transfer their license, the first thing the examiner does is to check the applicant’s driving record in their old state. The states communicate with each other.

As a driving school instructor, I’ve had quite a few students in my classes who received their tickets in other states and wanted to remove the points from their Florida driving record.

Insurance companies don’t belong to the compact and it doesn’t matter to them where you got the ticket or whether your home state considers it as a serious violation or not. If there’s a violation on your driving record from any state, they can raise your rates. Your driving record is public information that anyone can access and the insurance companies use that information when setting your rates. The only way to prevent that is if your home state has a law like the one in Florida that prevents them from raising your rates if you qualify to attend traffic school.

Question: Is it unsafe to drive with pets in cars?

Answer: It depends on how you transport the animal. Driving with unrestrained pets in a car can be dangerous for both you and the animal.

No matter how well trained an animal may be, they’re always unpredictable. It’s impossible to tell when something may be so enticing or frightening to an animal that it’s worth jumping out the window or clawing up the driver to escape. I’ll speak from a couple of my own experiences and hard learned lessons.

Many, many years ago we had a small terrier who used to accompany us when we ran errands or traveled. She had a lot of experience in the car and had never been a problem until one fateful day. We were traveling to a garden store that just happened to be across the street from her vet’s office. As soon as I turned the corner, even without looking out the window, she knew we were headed in the direction of the vet and she made a break for it by jumping out the open window into the middle of a very busy intersection. Fortunately, I was able to stop and other traffic cooperated by stopping long enough for me to catch her and get her safely back into the car.

On another occasion, we decided to get a kitten for our daughter. She had chosen a tiny kitten from a litter and we were on our way home on an interstate highway. So far, the sweet, tiny little kitten had remained very calm but, as I approached a toll booth, something spooked him. He raced right up my chest and dug his tiny, very sharp little claws into my face and held on for dear life. Luckily, there was very little traffic and I was already slowing for the toll booth. I had to steer with one hand and try to see around his body as I fought to rip his claws from my face. My three year old daughter thought it was hilarious.

If you’re the type of driver who likes to drive with pets in your lap, you might be heading for a big distraction if that pet wants to suddenly jump up and look out the window or try to escape. If a cat gets spooked in any way, you can count on being clawed as he tries to escape.

Even if the animal is calm and resting, if you have to suddenly hit the brakes, the animal is going to go flying into or under the dashboard; possibly interfering with your control of the gas and brake pedals. Depending on your speed at the time, it could lead to serious injuries for the animal.

Just like people, pets need to be restrained while in a car; either in a carrying case or by use of a halter designed to work with the seat belts. Now, when I travel out of state with my dog, she wears a travel harness and is clipped in to a D-ring in the cargo area behind the back seat. That’s the only way she has ever traveled. She’s used to it and remains very calm on our trips. It’s the best way to travel with a pet for both her safety and mine.

Question: Should You use your emergency flashers when it is raining hard?

Answer: This is a common sight, especially in the South where heavy summer thunderstorms hit often. Driving with your emergency flashers on is not only illegal, it’s a really bad idea.

Emergency flashers are only supposed to be used on disabled vehicles to warn other drivers away. They can’t be used in the rain or to identify slow moving vehicles and there are good reasons for this.

Having personally witnessed multiple drivers using their flashers in heavy traffic during a rain storm, I can tell you it made it very confusing for me and, I’m sure, other drivers. The flashers made it hard to tell the difference between the vehicle’s emergency flashers and the brake lights. Determining when the brake lights came on was even more difficult because people tend to ignore the lights on a vehicle whose lights are continually flashing. It also makes it difficult to distinguish between a vehicle that is moving and one that may actually be disabled and stopped. With the lowered visibility due to the rain, the flashers just added to the hazards.

Using your emergency flashers to indicate that you are driving slower than other traffic is also illegal. Vehicles with mattresses tied to the roof with string or cars running on less than all cylinders don’t belong on the road. If you need to carry something that won’t fit inside your vehicle, you need to rent a trailer or a van. If your vehicle is unable, for whatever reason, to keep up with the flow of traffic, you should also stay off the road until the condition can be fixed.