Prom Night: One Item Parents Should Splurge On

Prom night is just around the corner an proms can get pretty expensive for parents; from expensive dresses, tux rentals, flowers, and photos, it can all add up. However, there’s one item parents should really consider splurging on to keep their kids safe on prom night; a limo.

Prom night can be one of the most dangerous nights of the year. In spite of all the warnings that parents give, once the kids are out of sight, there’s really no way to predict what they may do or prevent them from participating in some of the more dangerous activities on prom night such as drinking or using drugs. At that age, peer pressure can be much more powerful than parental rules and warnings.

Prom night isn’t a night when you want to trust the driving to a teen. A recent study showed that sixty percent of teen crashes are caused by driver distraction. It’s not just texting and cell phones that cause the distractions. In fact, the biggest distraction for teen drivers is interacting with their teen passengers. Even if the kids remain sober, the excitement, novelty and the gathering of friends can be very distracting to a young driver. Driving late at night, after a long day of planning and the activities at the prom itself, can lead to drowsy driving. Also, even if the kids are sober, there are more drunks on the road on those late weekend nights and those drunk drivers combined with distracted teen drivers can lead to tragedy.

Parents should consider hiring or at least contributing to the hiring of a limo. If the parents do the hiring, then the limo driver works for them and the parent can set down certain rules for where the kids can go and at what time they should return. To save embarrassing the teen, the parents can arrange to check in with the limo driver for updates. The teens can feel glamorous and be as loud, raucous and distracting as they want while riding safely in the back, while the limo driver, sealed off in the front, concentrates on the road ahead.  It’s a win-win situation for all.

Binge drinking by teens can lead to genetic changes that will affect their adult behavior according to a study by researchers at the University of Illinois at Chicago College of Medicine and published online in the journal Neurobiology of Disease.

The researchers used rats as a model for teens. They gave adolescent rats, at 28 days of age, alcohol for two days on and two days off for 13 days. Later, as the rats matured, they were able to observe the adult rats for behavior changes and their preference for alcohol. Compared to rats that weren’t given alcohol as adolescents, the “binge drinking” rats showed more anxiety-like behaviors as they entered adulthood and, when given a choice between water or alcohol, showed a preference for the alcohol.

In the study, the brains of rats that were given alcohol as adolescents showed changes in the area of the brain known as the amygdala. They found increased levels of a protein (HDAC2) that causes the DNA to be tightly wrapped. The tightly wound DNA, together with the increased level of the protein limits the ability of nerve cells to form new synaptic connections.

The researchers felt that the tightly wound DNA strands prevented the formation of new connections needed in the rapidly developing adolescent brain. That the inhibited growth leads to more anxious behaviors and the tendency toward alcoholism in adults.

The one bit of good news was the discovery that a cancer drug known to block expression of the HDAC2 protein was able to reverse the effects of the tightly wound DNA strands in adult rats. However, it will take years of research to find out if the drug will also work on adult humans and whether or not the drug will have to be given long-term to reverse the effects of the alcohol consumed during adolescence.

The best cure is prevention. 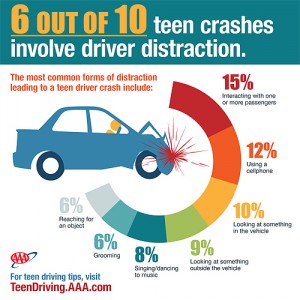 Traffic deaths spike during spring break according to a study released recently by the journal Economic Inquiry. The researchers looked at different spring break hot spots and  and found the the number of traffic fatalities in those localities were significantly higher compared to other localities in the same states at the same time of year.

The researchers from Department of Sociology in the University of Miami (UM) College of Arts and Sciences, studied fatal traffic crashes from the last week of February to the first week of April in 14 spring break hot spots across seven states: Arizona, California, Florida, Nevada, South Carolina, Texas, and Virginia.

One of the most interesting findings was the fact that “There were no statistically significant differences between traffic fatalities involving drivers with alcohol impairment compared to those with no alcohol impairment.” While alcohol certainly has an impact, this finding shows that other factors such as driver distraction are equally as dangerous.

During spring break, there are so many things that can distract a driver including:

A driver needs to not only be aware of and try to ignore the distractions but also be on the lookout for other distracted or drunk drivers.

If you feel that you may be missing out on the views while concentrating on the road, take turns swapping driving duties with a friend in order to become a spectator.

GDL laws were passed in an effort to allow more time for a teen to gain more driving experience without distractions. The reason for the passenger restrictions is that, the more teen passengers a teen driver carries, the more distracting the driving situation is. According to the Governors Highway Safety Association, adding just one passenger increases a teen driver’s crash risk by 50 percent. Put three or more passengers in the car, and that “risk is nearly four times greater.

The Insurance Institute for Highway Safety says that Iowa could cut its fatal teen crash rate by more than half if tougher teen driving laws were enacted.

For some reason, when the Iowa legislature passed this law, they included a provision that allowed parents to sign a waiver that exempted their teen from the passenger restriction provision. This appears to be a popular provision because 90 percent of parents of teen first time drivers have signed the waiver.

If parents were educated on just how dangerous teen passengers of teen drivers can be, they might reconsider and revoke the waiver. Even without such a law, parents should limit the number of passengers their teen driver can carry until the teen driver has six months to a year of driving experience.