Question: Who are better drivers, men or women?

Answer: Deciding who’s better is one of those questions that’s hard to generalize. In an equal opportunity country, there are certainly men and women who are fully equal when it comes to being bad drivers. From a totally personal and unscientific point of view, I can tell you that, in every traffic violator class I’ve ever taught, men far outnumbered the women. The scientific data also seems to show the same types of numbers. So, if by better, you mean safer and less likely to be involved in a crash, the numbers favor women.

The data doesn’t really measure who is a safe driver and who isn’t: it only looks at the number of traffic deaths per year and then breaks down those deaths by gender and age. The National Highway Traffic Safety Administration (NHTSA) data on driver fatalities for 2012 reveals a lot about the difference between male and female drivers.

Speeding – Out of the 33,561 traffic deaths in 2012, speeding was directly responsible for 10,219 deaths or 30 percent. Looking at the chart below, you can see that women in every age group were responsible for far fewer speeding deaths than men. 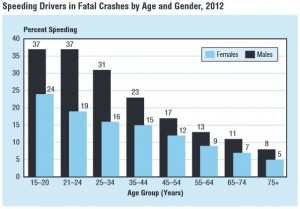 Alcohol – Alcohol was responsible for 10,322 deaths or 31 percent of the total but when you break down fatal crashes where the driver had a blood alcohol content of .08 or higher by gender, it shows that 24 percent of male drivers were legally drunk compared to only 14 percent of females.

Sorry guys; in this area, women seem to be far safer, smarter, and better drivers than men.