Question: Who are better drivers, men or women?

Answer: Deciding who’s better is one of those questions that’s hard to generalize. In an equal opportunity country, there are certainly men and women who are fully equal when it comes to being bad drivers. From a totally personal and unscientific point of view, I can tell you that, in every traffic violator class I’ve ever taught, men far outnumbered the women. The scientific data also seems to show the same types of numbers. So, if by better, you mean safer and less likely to be involved in a crash, the numbers favor women. END_OF_DOCUMENT_TOKEN_TO_BE_REPLACED

Question: What’s the difference between anti-lock brakes and regular brakes?

Answer: Anti-lock brakes or ABS is a braking system that helps in keeping control of your vehicle when the brakes are applied on slippery road surfaces. If you aren’t certain whether you have ABS or not, check your owner’s manual or consult the dealer. END_OF_DOCUMENT_TOKEN_TO_BE_REPLACED

Question: I stopped for a school bus the other day but my wife said you don’t have to stop on multi-lane highways. Who’s right?

Answer: Well it depends on what type of multi-lane highway you’re on. In most states drivers in the opposite lane of a multi-lane “divided” highway with a raised barrier or wide grassy median between the lanes don’t have to stop for school buses stopped in the other direction. The raised barrier or wide grassy median are the key here. On multi-lane highways that don’t have a raised or grass median, traffic is required to stop in both directions. This image from the Florida Drivers Manual should help to make it a little clearer. 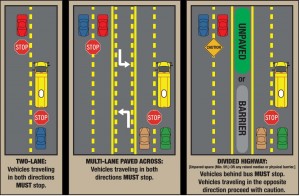 Question: Wouldn’t it be a good idea for drivers to have to take a new driving test every few years?

Answer: That sounds like a good idea and I would personally be all for it but we have to take a look at the number of people who actually receive a ticket for traffic violations and the impact that would have on the DMV.

The figures don’t show how many of those tickets were issued to the millions of tourists who visit the state each year so that reduces the total percentage of Florida licensed drivers who receive a ticket even further.The figures above mean that 75% of the licensed drivers in the state are apparently driving safely and obeying the traffic laws each year.

For anyone who has waited in line at the DMV, imagine how long the wait would be if all drivers had to re-test every few years and how many more driver license examiners we would need to hire to cover the increased workload.

The fact is that most people who receive a ticket in any state are well aware that they were violating the law at the time. Whether it’s speeding, running a red light, or making an illegal U-turn, those actions require a conscious effort on the part of the driver. We have discussed many times that there is no such thing as an automobile accident. Accidents are something we have no control over. In a car crash, one or more drivers make a poor (conscious) choice that leads to the crash and it was no accident.

Instead of re-testing every few years, a good idea for all drivers is to take a refresher driving safety course. Not only will these courses refresh your memory on the driving rules, they can also inform you of newly passed traffic laws you may not be aware of. Taking a course, whether online or in a classroom, can help you to refocus on the driving environment and strengthen your resolve to be a safer driver. Also, depending on your insurance carrier, it may lower your insurance rates.

Question: I know that you are supposed to wear a seat belt but I’m afraid of being trapped in my car if it should catch fire or go into the water. Are my fears real?

Answer: First off, I would never say anyone’s fears aren’t real. They are your fears so they are valid to you. Instead, let’s take a look at the reality of being trapped by a seat belt.

According to the National Highway Traffic Safety Administration, the type of crash you are imagining happens in less than one-half of one percent of all crashes. If we could plan our driving habits based on the type of crash we were going to have, then we could probably, just as easily, plan not to have a crash to begin with. But, for the sake of discussion, let’s assume you were one of the one-half of one percent involved in a crash into water or one that caused your vehicle to catch fire. What could happen to you if you weren’t wearing a seat belt?

Whether you crash into another vehicle or into water, your unbelted body will have no choice but to obey the laws of physics and continue traveling at whatever speed the car was traveling before the crash. That means your body will smash into the steering wheel at say 35 or 45 mph. Even in a relatively low speed crash at 25 mph, a small woman weighing 115 pounds will strike the steering wheel with a force of 2,404 lbs. If your car tumbles or spins out, your unbelted body will be thrown around inside the vehicle and you’ll probably have multiple impact points before coming to rest. Even if you’re still conscious after going through that sort of trauma, you probably won’t be in any shape to escape the vehicle.

No matter what type of crash or how violent it may be, you’re always better off securely fastened in place until the vehicle comes to a stop. By remaining fastened in, your chances of remaining conscious and healthy enough to effect an escape from the vehicle are tremendously increased.

As far as being trapped by the seat belt itself, mechanically, there’s nothing simpler than a seat belt latch. There is just one simple button to push and the probability of such a simple mechanism failing is astronomically small.