The Dangers Of Hoverboards

A week or so ago, as I was driving through my neighborhood, I came up on three kids riding hoverboards in the oncoming lane. The two boys and a girl, who looked to be around 13 years old, were moving along at a pretty good clip. The girl never took her eyes off of her cell phone while she was in my view. I thought, “here’s a crash waiting to happen.”

Hoverboards were the big gift item of the 2015 Christmas season and apparently sold like hotcakes. Just before Christmas, news reports started appearing showing hoverboard batteries that had caught fire and exploded; destroying at least one home in Louisiana. The fires are happening so often that a lot of college campuses banned hoverboards in their dorms.

While the fires are a legitimate cause for concern, a problem we aren’t hearing a lot about is the potential for serious injury among hoverboard users, especially if they take them on the road.

A statement published this week by the chairman of the Consumer Products Safety Commission (CPSC) addressed both the problems of the battery fires and the potential for serious injury by hoverboard users.

At least two teens – one in England and one in Dubai – died when they were thrown from their hoverboards into oncoming traffic. While the CPSC has started collecting data on hoverboard injuries and emergency room (ER) visits, it’s still too early to see if any trends are developing. The only similar activity is skateboarding which leads to an average of 111,000 ER visits by kids under the age of 18 each year. While many of those visits involve sprains, scrapes, and bruises, a significant number also involve traumatic brain injury. In 2014, 28 people were killed in skateboarding related crashes.

One major difference between skateboards and hoverboards is that, unlike skateboards, hoverboards can accelerate on their own depending on the weight and body positioning of the user. New users will have a steep learning curve before they can have total control over the boards.

After a teen in England was killed using a hoverboard, police were quick to remind people that, in the minds of the law, hoverboards are basically Segways without handles and the use of Segways on public property of any kind is illegal. In the US, the technology is so new that most states don’t have laws to cover them yet.

In Florida, if hoverboards are considered to be the same as a Segway without handlebars, they would fall under the law regarding “electric personal assistive mobility devices (EPADs)” and  are allowed:

(a) On a road or street where the posted speed limit is 25 miles per hour or less.

(b) On a marked bicycle path.

(c) On any street or road where bicycles are permitted.

However, if the hoverboard user is under the age of 16, they must wear a bicycle helmet that meets the standards of:

Counties, cities and towns can make regulations regarding EPADs and the Department of Transportation can ban their use on roads where they might otherwise be used if it’s felt that the regulations or bans are in the interest of safety.

Children who use hoverboards should:

Owners of hoverboards should:

For additional hoverboard safety recommendations, visit: Statement from the U.S. CPSC Chairman Elliot F. Kaye on the Safety of Hoverboards

Should children be required to wear reflective vests at school bus stops? That’s the opinion of a South Carolina man after he was involved in a tragic incident last month.

At 6:30 in the morning, a 15 year old girl, escorting her younger siblings to school, tried to cross a four lane highway. Wearing dark clothes and crossing away from an intersection, she was struck first by a semi and then struck again as she was lying in the roadway. Police didn’t charge either driver because they felt there was little either driver could do to avoid hitting her.

Torn by the incident, the driver of the second vehicle wrote a letter to his state representative asking for a law that would require children at school bus stops to wear reflective vests.

His proposal isn’t a bad idea. While it may not be necessary for the state to pass a law, it is certainly something that school boards should encourage and parents can easily do on their own. With the time change last month, many kids are heading out to school while it’s still dark. Kids are impulsive and don’t always follow the rules. Anything that can be done to make them more visible is a good idea.

A quick search for children’s reflective vests on Google shows a wide variety of vests from $5 to $15. A cheap price to make the kids more visible. Reflective tape can also be sewn or pasted on backpacks at a very low cost.

It’s hard to get tweens to buckle up so the federal Department of Transportation (DOT) and the National Highway Traffic Safety Administration (NHTSA) are trying to do something about it. Citing alarming statistics of tweens (ages 8 to 14) who were killed because they weren’t wearing a seat belt, DOT and NHTSA announced a new campaign called “Never Give Up Until They Buckle Up.”

Parents who would never dream of bringing their newborn home from the hospital without a proper car seat and who taught their toddlers that the car wouldn’t start until everyone was buckled in seem to give up on tweens. With the rush-rush lifestyle of many families and so many short trips to school, practice and the store, it sometimes seems too much of a hassle to fight the seat belt fight with tweens.

Tweens are entering that age where they are starting to feel grown up. They’re experimenting with limits and testing the rules. They often feel like they’re too old for seat belts and, in order to show their independence, don’t bother to buckle up. That can be a deadly mistake.

According to NHTSA, “Over the past 5 years, 1,552 kids ages 8-14 were not wearing seat belts when they died in a crash, and one in four of those kids were age 14. That’s a trend that has to stop now.”

Among other important information, the Never Give Up Until They Buckle Up website has information for parents on:

The tween years are the time when it’s more important than ever to stress how important the rules are if tweens want to live long enough to become teens.

Read more: Don’t Give Up Until They Buckle Up

Shopping For A Car? NHTSA Has Helpful App

If you’re shopping for a car, the National Highway Transportation Safety Administration (NHTSA) has an app that can help you find the safest car within your budget. The app, called “Safercar” is available for both android and iPhones.

The app lists all vehicle models going back to 1990. It separates those vehicles manufactured between 1990 and 2010 from those manufactured beginning with the 2011 model year and later because the testing standards changed. Beginning with the 2011 model year, the testing standards were updated with new, stricter requirements to earn the top “5 Star” safety rating.

After selecting a particular make and model, the app lists that model’s safety ratings  for both driver and passengers in frontal and side collisions. It also rates the vehicle’s risk of a rollover in a crash. 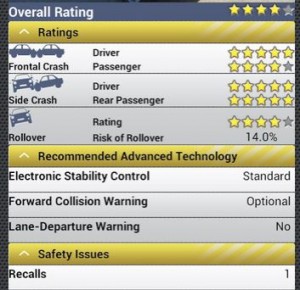 The app also lists recommended advanced safety technology such as electronic stability control and rearview cameras and whether or not the equipment is standard or an option on that model. You can also use the app to look up recalls for that particular make and model. Shoppers can save a model for comparisons with other models.

Vehicle owners can also create a personal profile and, by putting in a vehicle identification number for their car, request to be notified of any new recalls by email.

Another very helpful feature, especially for expectant parents or grandparents, is the ability to search nearby locations for car seat inspection stations. By putting in your zip code, the app gives contact information – normally a children’s hospital or the local police department – where you can make an appointment to learn how to properly install your new child car seat.