A Christmas Gift For Safer Driving

If you’re looking for Christmas gift for someone who’s hard to buy for, you may want to consider a gift that’ll contribute to their safety on the road. It’s a gift that says “I love and care about you” and it’s practical at the same time. Here are some gifts you might want to consider, especially for those who have small children.

If you know someone who’s expecting or whose child may be outgrowing their car seat, this can be an excellent gift. Remember that child seats have an expiration date and parents should avoid getting a used car seat for their child. Exposure to the sun and heat in a car over time can cause the synthetic fabrics used in the belts to wear down and become weak.

For newborns, get a rear-facing car seat.

Convertible seats can be used as rear-facing seats for newborns and can then be shifted to face forward for toddlers.

Children are often graduated to seat belts way too early and that’s dangerous for them. For toddlers who’ve outgrown their car seat, get a booster seat that will allow the child’s seat belt and shoulder harness to fit properly. Kids should stay in booster seats until they’re at least 4’9” tall.

For info on the best car seats, visit: http://www.consumerreports.org/cro/car-seats.htm

For info on the best booster seats, visit: http://www.iihs.org/iihs/sr/statusreport/article/50/9/1

Everyone needs a new set of tires now and then. If you’re wondering whether or not it’s time to get a new set of tires, do the Abe Lincoln test. Take a penny and with Abe Lincoln’s head showing, stick it head-first between the treads. If you can see the top of Abe’s head, the tires are worn too low and need to be replaced.

While they don’t really directly contribute to driving safety, a dash cam can help a driver prove who was at fault in a crash. That can save a lot of money and heartache over the long run. Dash cams have come way down in price and are easy to install. Make sure you get one with enough memory capacity to cover a long period.  Get one with an impact detector that will save the file after it feels an impact. You can also get a combination dash cam and backup camera that uses the rearview mirror as a screen. For more info, visit: http://www.cnet.com/videos/car-tech-101-dashcams/

In February of this year, 60 Minutes correspondent and CBS newsman Bob Simon, was riding as a rear seat passenger in a livery cab when it was involved in a crash. Simon, who wasn’t wearing a seat belt, received massive head and torso injuries and died shortly after being taken to a hospital.

The Governors Highway Safety Administration (GHSA) says that too many adults riding in the rear seat fail to wear a seat belt and almost half of those who were killed in crashes could have survived had they been wearing a seat belt. According to a report by the GHSA, in 2013, 883 unrestrained rear seat passengers age eight and older were killed in crashes. The GHSA estimates that more than 400 of them would have survived if they had been wearing a seat belt.

The GHSA report places a lot of the blame for the lack of seat belt use among rear seat passengers on the states for failing to pass strict seat belt laws that require all occupants of a motor vehicle to use seat belts; no matter where they are seated. Only sixteen states and the District of Columbia currently have primary seat belt laws that require everyone in the vehicle in both the front and rear seat to be buckled up at all times. Ten states have secondary laws requiring rear seat seat belt use but those laws can only be enforced if the driver is stopped for another “primary” traffic offense. Some states have a mix of primary front seat and secondary rear seat laws. Twenty-two states, including Florida, have no laws at all requiring the use of seat belts by adults in the rear seat.

Even if they have primary seat belt laws for all seating positions, some states, including New York, don’t require rear seat passengers in taxis or cars-for-hire to wear seat belts. In the case of Bob Simon, he wasn’t required by law to wear a seat belt but many feel he would have survived the crash if he had been wearing one.

Adults who don’t use seat belts in the rear seat often aren’t the only ones killed or injured in a crash. Even those in the front seat who are using seat belts can be killed in a crash when they’re struck by the rear seat adult’s body as it flies forward and bounces around the interior of the vehicle.

The GHSA calls on states to enact strict, primary seat belt laws requiring all passengers, including those in the rear seat to wear a seat belt at all times. Even if your state doesn’t require the use of seat belts by adults in the rear seat, it’s always a good idea to wear one. Seat belts save lives.

We’ve written before on the fact that hands free communication devices are no safer or any less distracting for drivers than hand held devices; now there’s evidence that shows they’re still distracting, even after hanging up.

A new study conducted by the University of Utah for the AAA Foundation for Traffic Safety (AAA) shows that it can take up to 27 seconds before the brain can refocus on the task of driving after hanging up on a hands free call or text message. To put that into context, over a period of 27 seconds, a vehicle traveling at just 25 mph will cover approximately 992 feet or the length of three football fields before the driver is able to fully concentrate on the mental task of driving.

The University of Utah conducted two different studies for AAA. The first studied the distraction level of using hands free voice commands to dial phone numbers, call contacts, select music, and send voice texts with Microsoft Cortana, Apple Siri and Google Now. The study showed that, while Google Now was a bit less distracting, all three systems were highly distracting to the drivers.

The tests were conducted using volunteers ranging in age from 21 to 70. The volunteers were accompanied by a researcher as they drove at 25 mph on a 2.7 mile route in a Salt Lake City neighborhood. Each volunteer wore a head mounted device that flashed a red LED light every three to five seconds just to the left of the driver’s vision. Each time they saw the light, drivers would note it using a thumb mounted button. Cameras and other sensors mounted in the vehicle recorded how much time the driver’s eyes were on the road, mirrors, or dashboard. Drivers also participated in a survey to record their perceived attention span during and after the hands free activities. Before conducting the tests, the drivers were allowed to take the car home for a five day period to learn and try to become proficient with the systems.

Most people felt that their full attention was restored after hanging up but the data showed that wasn’t the case. The researchers feel that high tech manufacturers are rolling out the systems too early. There hasn’t been enough time devoted to perfecting the systems and verifying their safety. 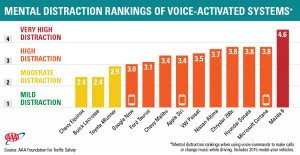 Read more: Up to 27 seconds of inattention after talking to your car or smartphone

Watch for Deer On The Road

It’s that time of year again when it’s important for drivers to watch for deer on the road. The term “deer” also includes moose, elk, and caribou in those parts of the country where they live.

Deer tend to congregate along the sides of the roads during the fall mating season from October through the end of the year and are mostly encountered at dawn and dusk when it’s hardest to see them.

According to the Washington State Department of Transportation, your chances of hitting a deer are greatest:

Your chances of being involved in a collision with a deer on the road also depends on the state in which you live. According to data compiled by State Farm Insurance, a Florida driver’s chances of hitting a deer are 1 in 930 compared to West Virginia where a driver has a 1 in 44 chance of an encounter.

Most often, your first hint of a deer on the road will be the light reflected from their eyes.

Once you see one, slow down. You can count on more deer being close by but you can’t count on how they will behave as your vehicle draws near..

Since deer tend to forage at night, their eyes have evolved to gather more light. Once those large eyes are hit by the beams from a car’s headlight, it results in an explosion of light that blinds and immobilizes the deer (the deer in the headlights effect).

Honking your horn may frighten the deer and cause it to run but it could just as easily run into the roadway. Honking your horn is only a good choice if you’re driving slowly enough that a collision won’t do much damage.

If a deer runs into the road, don’t give into the temptation to swerve in hopes of avoiding it. Swerving may cause you to lose control of your vehicle leading to an even worse crash. Sadly, it’s often a safer choice to hit the animal that has run out into the road rather than swerving to avoid it.

In 2013, four drivers were killed and 465 were injured in crashes involving animals on Florida roads. Nationwide in 2013, according to the Insurance Information Institute, there were 191 deaths caused by collisions with animals.

Autonomous Vehicles Can Save Money, Lives

A couple of interesting studies have been published recently that show that the adoption of autonomous vehicles (AVs) and Advanced Driver Assistance Systems will not only save time and money but will, most importantly, save lives.

In a study conducted by McKinsey & Company, researchers pointed out ten ways AVs could change the automotive world. Among their findings, the researchers estimated that:

However, we don’t have to wait for fully autonomous vehicles to start saving lives on the road.

Another study conducted by the Boston Consulting Group showed that 10,000 lives per year could be saved through use of advanced driver assistance systems (ADAS) that are currently on the market.

According to the researchers, 28 percent of all crashes in the US could be prevented if vehicle owners were to invest in the most common forms of ADAS available on the market today. Those systems include:

The problem is that few potential buyers are willing to spend the extra amount or don’t understand how the systems work enough to realize their potential value. However, consumers could quickly recover the extra costs based on the amount they save in insurance costs.

The increased introduction of ADAS and AVs depend both on the development of new technologies by manufacturers and the willingness of consumers to buy those technologies. Once that starts happening, Americans will start to save more time, money, and, most important of all, lives.

Nearly 10,000 Deaths Could Be Prevented and More Than $250 Billion Saved with Greater Use of Driver Assistance Technologies