Stiffer penalties for violating nighttime driving restrictions can lead to fewer crashes by teen drivers according to a study published in the June 2015 edition of Health Affairs.

Teens lead busy lives and, especially during the school year, tend to not get enough sleep. The tendency to drive drowsy combined with limited visibility and limited driving experience make nighttime driving especially hazardous for teens.

It has long been recognized that the teen crash rate increases at night and most states restrict nighttime driving by teens as part of their Graduated Driver License Laws (GDL). Under the GDL laws, teens are normally restricted from driving without a licensed adult present generally from 11:00 pm until 6:00 am, depending on the state where they are licensed. Depending on the state, those restrictions are generally lifted either after the first year or when the teen reaches the age of 18.

The State of Massachusetts limits nighttime driving by teens between the hours of 12:30 am and 5:30 am. Prior to 2007, violation of this restriction resulted in a $35 fine for a first offense and fines of $75 to $100 for second and subsequent offenses. In 2007, Massachusetts changed the penalties for nighttime driving by teens to a 60 day, 180 day, and one year license suspension depending on the number of previous offenses.

The results showed that the rate of crashes involving fatal and incapacitating injury among drivers age 16-17 fell by 40 percent. The overall rate of police reported crashes for teens in the 16-17 age group fell by 19 percent and the nighttime crash rate fell by 29 percent.

According to the senior study author at BWH, “Our data demonstrate that the 2007 revisions to the Massachusetts Junior Operator Law have prevented about 320 fatal and incapacitating injuries and 13,000 motor vehicle crashes among Massachusetts teen drivers over the past eight years.

Teen Drivers Most Likely To Kill Passengers And Non-Occupants

Teen drivers are most likely to kill their passengers or non-occupants of the vehicle than themselves. This finding is part of a study recently released by the AAA Foundation for Traffic Safety. The study looked at crashes involving at least one teen driver aged 15-19 between 1994 and 2013 and revealed some interesting findings.

The good news from the study is that deaths and injuries in crashes involving teen drivers have decreased steadily over the years. The greatest decrease is among the youngest drivers. When comparing the death rate for teens at its peak in 1999, the number of teen drivers involved in fatal crashes has fallen by 56 percent and the number involved in injury crashes has fallen by 51 percent.

The reasons for this aren’t fully known but experts suggest that stronger Graduated Driver License Laws (GDL) have played a part. The crash rate is higher for 18 and 19 year olds than for younger teens and that may reflect that older teen drivers, out from under the restrictions of GDL laws, may now feel free to take more risks.

The bad news is that teens still crash at a higher rate than older drivers and, more often than not, someone other than the teen driver is most likely to be killed or injured in the crash. Forty percent of people killed and 50 percent of those injured were non-occupants of the teen driver’s car, either occupants of other vehicles or pedestrians and cyclists.

When it comes to a wish list for self-driving cars, teens and parents share some ideas but differ widely on others. This not too surprising fact is the result of a study conducted by the Carnegie Mellon University School of Engineering (CMUSE).

Eighty-four percent of respondents, including a majority of the youngest drivers, said their self-driving car wish list would include these features. Among the strongest advocates for these features are:

One might wonder why a limit on passengers would be necessary in a self-driving car. Most self driving cars, at least in the beginning, would still require a driver to be alert and take over in the event of a systems failure or where the computer fails to recognize a hazard. The more passengers there are, the more distractions there are for the driver and the greater the chance for a crash.

Curfew times are another good idea. Teens tend to be sleep deprived and falling asleep at the wheel is an all too common occurrence. A car that could keep a teen driver from staying out too late could also save a lot of lives and parent’s frayed nerves.

Control feature to limit the geographic range the car will travel.

Not surprisingly, this is a feature that most parents – men (62%) and women (61%) – want but the idea isn’t too popular among younger drivers with barely half (54%) thinking this feature is a good idea.

This is another one of those wish list features that showed a large generational divide with 69% of the youngest drivers thinking it a good idea while only 53% of people aged 56 to 65 favored it. Women favored the idea (63%) more than men (57%). However, texting in any fashion whether using a hand-held cell phone or a built-in display screen, isn’t a good idea because it takes the driver’s eyes off the road for too long.

The need for and effectiveness of these wish list features will depend on just how completely autonomous the self-driving cars will be and how secure and hack-proof the control systems are.

Read more: Teens Probably Won’t Like Self-Driving Cars, But Their Parents Will

Teens drive better when mom comes along and they feel good about it too according to a study conducted by the Beckman Institute for Advanced Science and Technology, University of Illinois, Urbana – Champaign.

In this novel study, 25 fourteen year old teens were each placed in an fMRI machine that allowed the researchers to view and record their brain activity while driving a computer simulated driving course. The fMRI machine shows blood flow to areas of the brain that are most active. The teens were paid for their participation but they were also told that, if they scored the fastest time, they would get more money.

The course had 26 intersections and the timing of the lights and the presence of cross traffic varied so that the teens wouldn’t experience the same traffic patterns each time. If the teen stopped at a traffic light, it cost them three seconds added to their time. If they attempted to run a red light and were involved in a “crash,” it cost them 6 additional seconds.

When teens drove alone, they were much more likely to try to make it through a yellow light before it turned red. If they made it through safely, without costing them any more time, the researchers were able to see more blood flow to the reward center of the brain. In other words, the teens felt good about their decision and you could witness that good feeling as it appeared in the brain.

When the teens were told their mom was watching, the teens drove much more carefully and tended to stop when they encountered a yellow light. The strange thing is that, with mom “in the car,” the same reward area of the brain lit up when they drove safely.

It appears that, if a parent is along, teens tend to take fewer chances and they actually feel rewarded by driving in a safe manner.

Of course mom can’t be in the car at all times but there are systems that allow moms to look over their teen’s shoulder. There are a variety of apps and plug-in systems that report if the teen is driving aggressively, turn off the cell phone and inform the parents of the teen’s location. If only they could bake cookies too.

In 2013, the last year for which there are figures, there was a monthly average of 685 teen drivers and passengers, aged 15 through 20, who lost their lives on US roadways. During the months of June through September, 498 additional teen drivers and passengers lost their lives in traffic crashes; an increase of 18.25% over the annual monthly average. 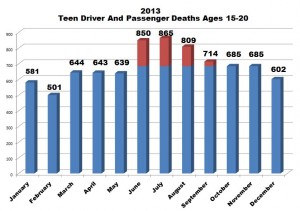 What are the reasons for this increase in teen traffic deaths? Some of the reasons include:

What can parents do to reduce this risk?