You never know what you may encounter on the roadway. Along with other traffic and pedestrians, drivers need to be aware of the possibility of horses and livestock on the road. A crash near Jacksonville Florida yesterday points out the necessity of watching for the unexpected while driving.

A man was riding a horse along a country road north of Jacksonville when they were hit by a car. The driver said she didn’t see them initially but, when she did, she hit the brakes but it was too late. The man was thrown from the horse and received critical injuries. The injured and frightened horse ran out into the roadway where it was hit and killed by another car.

In Florida, as well as most other states, horseback riders have a right to use the roadways. Horseback riders along with pedestrians, cyclists, motorcyclists, and those who use personal mobility devices are considered to be vulnerable road users.  The Florida legislature is currently considering a bill to strengthen the penalties for anyone who injures or kills a vulnerable road user by careless or negligent actions.

Drivers on country roads may think they have a clear and unobstructed road but can be surprised by what may be around the next curve. Last year, while driving I was driving on a country road in North Georgia, other drivers approaching me flashed their lights at me. Thinking they were warning me of a patrol car ahead, I didn’t worry because I was traveling within the speed limit. What they were really trying to warm be about was a calf that had escaped its enclosure and was wandering alongside the road.

If you approach a horseback rider or a wandering cow from behind, keep in mind that the animal itself can only see straight ahead. The animal may be unaware of your presence. Slow down and give the animal a wide berth. Never honk your horn. That could cause the animal to panic and run out into the road.

You don’t necessarily have to be on a country road to encounter horseback riders. As part of the you never know what to expect file, take a look at this recent news report from Atlanta.

Can Courtesy Keep You Safe On The Road?

Courtesy is a hallmark of Japanese culture. It’s hard to think of Japan without the vision of hyper-polite citizens bowing to each other. One theory of Japanese etiquette is that it developed long ago to deal with the problems of a very large population living and working in a very small country. Along with courtesy, there’s also a strict adherence to society’s rules. This led me to wonder if Japanese courtesy and adherence to the rules extended to the roadways and how Japanese drivers compare with those in the US.

With that many vehicles in such a small space, you might think that Japan would have a high roadway death rate but that isn’t the case. When comparing the highway fatality rate of the two nations, the figures look like this:

According to The International Transportation Forum, in 2012, the total highway fatality rate in  each country was:

*Out of all the highway deaths in Japan, 36% were pedestrians.

When you think of the US, you tend to think of a fast paced life style but Japan’s society is every bit as fast paced, if not more so.

When comparing speeding between the two countries:

Could it be that the Japanese sense of courtesy and adherence to societal rules is responsible for the large difference in highway death rates? If Americans were just as courteous and law abiding on the roads, could we drastically reduce our highway death rates? There’s only one way to find out.

Ants, even when moving in large swarms seem to handle traffic, prevent traffic jams, and keep traffic flowing smoothly much better than humans can.

Physicist Apoorva Nagar at the Indian Institute of Space Science and Technology working on previous work by a group of German and Indian scientists has written a soon to be published paper on this phenomenon. The German and Indian scientist’s work showed that ants traveling in a line were able to move steadily and at a constant speed without bunching up. Nagar was able to show mathematically why large groups of ants seem to be able to move so steadily without causing a traffic jam.

According to Nagar, the reasons ants don’t jam up are:

These are basic concepts in traffic flow management that many humans seem incapable of grasping. It’s hard to convince drivers that maintaining a longer following distance and traveling at a steady speed, even if that means going slower than the speed limit, will keep traffic moving smoothly and actually get them to their destination faster. It’s for this reason that advocates of self driving cars are hoping that, when the cars take over driving, traffic jams will be a thing of the past.

We have written on this issue before and have posted videos that explain why traffic jams occur and how to avoid them but they bear repeating.

Read more: Why Ants Handle Traffic Better Than You Do

How To Handle A Traffic Stop

For cops, there’s no such thing as a routine traffic stop. For Albuquerque (NM) Police Officer Lou Golson, this traffic stop started out like a thousand other traffic stops but, as the video above shows, this stop was anything but routine.

As a traffic school instructor I’ve heard a lot of complaints about the conduct of police officers during traffic stops but, from the perspective of law enforcement officers, they never know how the situation may turn out and they must always be on guard during a traffic stop. As the person who’s being stopped, you may be angry but the police officer is understandably fearful. When a driver who has been stopped is belligerent or argumentative, the officer on the scene is going to reply in kind.

It’s important for the driver who has been stopped to think about what’s happening from the perspective of the police officer. If a police officer is directing you to pull over, signal for a turn to the right, then move over to the right side of the road and pull over in a way that gives you plenty of clearance between you and the traffic on the road. Pulling far to the right is both for your safety and the safety of the officer.

It’s common for a driver who’s been pulled over to immediately start reaching for their driver’s license or to look in the glove compartment for their vehicle registration. The police officer who sees this activity doesn’t know if you are reaching for your registration or a gun. He or she will be automatically on guard. Once you’ve pulled over, roll down your window and place your hands in clear view on the steering wheel. Don’t try to reach for anything until you’ve been directed to by the officer.

Always wait for and follow the officers directions. When the officer asks for your license and registration, let the officer know that you’ll need to reach for your wallet, purse, or into the glove compartment to get it. You’re nervous but he’s even more nervous; don’t make any quick movements. Communicating openly with the officer will make everything go much more smoothly.

Don’t try to argue with the officer or offer excuses; he or she has already heard them all. The officer often has discretion to issue a warning or give a ticket for a lesser offense; the more cooperative you are, the better the chance that the officer will exercise that discretion.

Another danger involved in a traffic stop is failure of other drivers to obey the “Move Over Law”. If the officer asks you to step out of the vehicle, follow the officer’s directions about where to go and stand. The video below shows why you shouldn’t stand close to the roadway or between the vehicles. 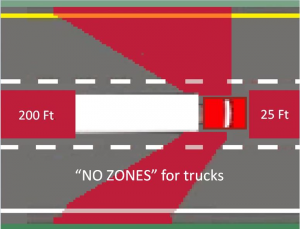