A study conducted by the University of Washington School of Pharmacy shows that people using prescribed sleeping pills are at a greater risk for experiencing a motor vehicle crash. The research, published in the American Journal of Public Health, revealed that the risk of a car crash is nearly double among new users of the medications temazepam (Restoril), zolpidem (Ambien, Ambien CR) and trazodone (Desyrel).

The dangers posed by these drugs for drivers is worse for those who have been newly prescribed and the increased crash risk can last for up to a year. Among the three drugs followed in the study, temazepam showed the least risk.

The head researcher, Ryan Hansen was quoted as saying the idea for the research came from a friend who, after taking  a prescription sleeping pill, woke up in the kitchen and noticed a bite taken out of some raw pork in the refrigerator.

Over the last few years there have been many instances of what has been dubbed “sleep driving” while using the popular prescription pill Ambien. The most notable story involved US Rep. Patrick Kennedy of Rhode Island who crashed into the gatehouse of the US capitol in the middle of the night. He explained to capitol police that he was late for a vote.

The list of side effects for Ambien include the following warnings;

Ambien has become one of the most prescribed drugs in America. The researchers in this study suggested that health care providers need to evaluate the necessity of these sleeping pills vs the risks they pose. They suggested that insomnia can be treated without sleeping pills by lifestyle changes such as reduced caffeine use and exercise.

Railroad crossing incidents have steadily increased over the past three years. FRA officials aren’t sure why the number of crossing incidents are on the rise but it’s hoped that the new partnership with Google will help to reduce those numbers.

No date has been given for when the data will be available on the Google navigation system but Google executives say the project will be given a top priority.

The FRA has also reached out to Apple, MapQuest, TomTom and Garmin to include railroad crossing alerts on their navigation systems.

In Jacksonville, FL alone, over the past month, one car was cut in half by a train when the driver ignored railroad crossing arms and signals and tried to beat a train across the tracks. Luckily no one was killed but four people, including a pregnant passenger were injured.

In another Duval County incident this past weekend, one train was stopped at a crossing and the driver apparently didn’t see another train approaching on the other track when he drove around the downed crossing arms. One person was killed and another critically injured in that crash.

Because they’re so large, trains appear to be going slower than they actually are. Regardless of their speed, the massive weight of railroad locomotives can do a tremendous amount of damage. The weight of a train also means that it takes a very long time for a train to be brought to a stop. For freight trains, it can take up to a mile to bring the train to a full stop. 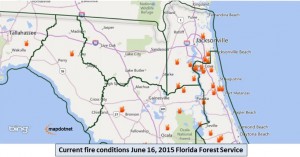 Airbag Recall Expands To Include 34 Million Vehicles In US

The Takata airbag recall was expanded this week to include 34 million vehicles in the US. The announcement was made by Department of Transportation Secretary Anthony Foxx on May 19th.

Previously, Takata had refused to admit that a defect was present in its airbags but allowed that vehicles in areas with high humidity might experience problems. The initial recall of vehicles with Takata airbags installed, was limited to vehicles in Florida, the Gulf states and Hawaii. Now Takata has admitted that there is a defect with the inflators and specifically with the propellant used to inflate the airbags.

The propellants in the inflators use a chemical that can degrade over time. If moisture is introduced into the chemical, it can lead to “over-aggressive combustion” leading to higher internal pressures that can rupture the body of the inflator. The defective airbags are responsible for six deaths and more than 100 injuries.

With the admission that there is a defect in the airbag inflators, the airbag recall will now include more vehicle manufacturers than previously thought. Vehicles now subject to the recall are made by the following manufacturers:

According to the National Highway Transportation Safety Administration (NHTSA), it will take vehicle manufacturers about a week to determine which of their vehicles are affected by the airbag recall order. Takata will create a plan to find and replace the affected vehicles as soon as possible with priority going to vehicles located in states with high humidity.

For vehicle owners who want more information about the airbag recall, NHTSA has created a “recalls spotlight” page on their SaferCar.gov website. Follow the link to VIN lookup.

The VIN is your vehicle’s identification number. The VIN can be found either on an inspection plate on the driver side door jamb or under the windshield on the driver’s side of the vehicle. The VIN can also be found on your auto insurance policy and your insurance ID card.