Minivans are popular vehicles for families with children however, those families thinking about buying one will want to look carefully at the crash test results for those types of vehicles. The Insurance Institute for Highway Safety (IIHS) recently issued a report on the results of their minivan crash tests. Only two minivans received an acceptable rating and three received a poor rating.

In the most recent minivan tests, the Nissan Quest, the Chrysler Town & Country and its twin, the Dodge Grand Caravan, all earned poor ratings. The crashes in these three vehicles showed major intrusion into the driver compartment that would result in severe and possibly fatal injuries to the driver.

It’s felt that the minivans fared poorly because many minivans are built on car chassis but are generally wider than cars. The wider vehicle extends out over the main structure.

Two minivans earned acceptable ratings; the 2015 Toyota Sienna and the Honda Odyssey. Toyota modified the 2015 Sienna model to better withstand the small overlap crash test. However, even with the modification, there was still some intrusion into the driver’s compartment and the dummy’s head slid off the side of the airbag. The seat belt also allowed the dummy to move too far forward. Those results earned the Sienna an acceptable rating but, when combined with a crash avoidance system, it earns a top safety rating.

In the case of the poorly performing 2011-2015 Nissan Quest, there was more than two feet of intrusion into the passenger compartment. The dummy’s left foot was trapped between the seat and the instrument panel and the right foot was trapped beneath the brake pedal  and toe pan. Researchers had to cut the seat out and use a crowbar to remove the dummy’s foot. According to the researchers, a person who experienced this type of crash would be lucky to ever walk normally again.

The only minivan not tested by the IIHS was the Kia Sedona. The manufacturer stated that they are making modifications to the vehicle’s structure and it will be available for testing soon.

Drivers Abandon One Dangerous Habit For One More Dangerous

Drivers are using cell phones less but the even more dangerous habit of texting while driving hasn’t changed according to a new study by State Farm Insurance. State Farm has conducted a phone survey of drivers aged 18 and over every year for the past six years and the trends are both encouraging and disturbing at the same time. According to the survey:

According to State Farm, the growth of Smartphones has created new distractions with “a significant increase over six years in drivers using their phones for: accessing the Internet, reading email, responding to email, programming and listening to a navigation system and reading social media.”

Another disturbing finding is that ten percent of drivers report that driving in school and construction zones has no impact on their cell phone use.

More drivers report that they are using hands-free devices but a recent study by AAA shows that hands free devices can be even more distracting because the effort required in getting the voice recognition system to recognize commands can frustrate drivers and distract their attention from the road.

Even though most drivers report that they are more likely to talk on a cell phone rather than text, drivers still don’t seem to be getting the word that cell phone use is still distracting because paying attention to a cell phone conversation requires concentration and brain power that should be devoted to the road ahead.

For more information, read: DRIVERS ADMIT TO USING THEIR PHONE WHEN BEHIND THE WHEEL – HERE’S WHEN

Police in Woodbridge New Jersey recently used a decoy fire truck to enforce that state’s Move Over Law. In spite of the fact that a large fire truck with its emergency lights flashing was posted on the road’s shoulder, many motorists paid no heed and refused to slow down or move to the far lane.

The first Move Over Law in the US was enacted in 1996 and, as of 2012, all 50 states have some form of Move Over Law that requires motorists to move over into the opposite lane or, if they can’t move over, to slow down when they encounter emergency vehicles on the side of the road. In spite of the law, according to estimates, law enforcement officers are killed by the side of the road at a rate of one per month and approximately five firefighters per year are killed. Surprisingly, tow truck operators are killed at an even greater rate.

New Jersey’s law was enacted in 2009 and requires that motorists who can’t move over into the opposite lane slow “to a reasonable and proper speed for the existing road and traffic conditions, which speed shall be less than the posted speed limit, and be prepared to stop.” The law not only includes police and fire vehicles but also tow trucks, highway maintenance, and service vehicles that are displaying emergency flashing lights.

This year, Florida amended its Move Over Law to include garbage/sanitation trucks and utility (gas, electric, water) vehicles in addition to police, fire, and tow trucks. Under Florida’s law, motorists who can’t move over are required to slow down at least 20 mph under the posted speed limit.

In planning for the use of the fire truck decoy, Woodbridge police set up rules:

Fortunately, the majority of motorists that were monitored did slow down or move over. Unfortunately for some, the only way to get their attention is by issuing a traffic ticket. The first driver cited for failure to obey the law was traveling at 62 mph and made no effort to move over or slow down.

With the holidays approaching and the roads filled with travelers and shoppers, emergency personnel will be out on the roads in force. Protect the ones that protect you by obeying the Move Over law. Read more: Police use ‘decoy’ firetruck to educate drivers on Move Over law

With the way too early severe cold weather hitting most of the nation, people are pulling their bulky winter coats out of storage but, while those coats provide protection from the cold, they could pose a danger when they are worn under seat belts. Children may be especially vulnerable to the hazards posed by bulky coats winter coats or blankets if they are placed between the child and the seat belt.

In a crash, the body will continue moving forward and injuries or death are only prevented by a seat belt that fits snuggly around the hips. If a bulky winter coat is worn or a blanket is placed between the body and the seat belt, as the body flies forward, instead of being held back, it will slam into the seat belt, possibly causing internal injuries. 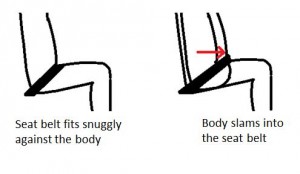 For more information on how to protect children in winter, read: Safe Kids: Use thin coat in car seat

Figures from the National Highway Traffic Safety Administration shows that approximately 301 people lost their lives on American roadways during the Thanksgiving weekend in 2012. The Thanksgiving highway death count starts at 6:00 PM on Wednesday, the day before Thanksgiving and runs through 5:59 AM on Monday morning.

There are lots of reasons for the high death rate on the roadways. Beginning on Wednesday night, the highways will be very crowded and the flow of traffic will be very slow. That can lead drivers to become frustrated and take unnecessary risks that they might not otherwise take. In American culture, football games and alcohol seem to go hand-in-hand and there will be a lot of drunks on the road. Sunday traffic is almost as bad as the Wednesday evening traffic and, unfortunately, too many drivers wait too long to get on the road to head back home. Drivers may try to speed or take risky chances. Aggressive drivers will be out in force.

With Thanksgiving less than two weeks away, law enforcement agencies throughout the nation will be conducting their annual Thanksgiving “Click It Or Ticket” campaign. The “Click It Or Ticket” campaign begins on November 17th and will run through November 30th. During that time, police will be out in force looking for people who aren’t wearing their seat belts. Sixty percent of the people killed during the 2012 Thanksgiving holiday weekend weren’t wearing seat belts. Police will also be on the lookout for those who are speeding, driving aggressively, or appear to be driving under the influence.

If you plan to travel over the Thanksgiving weekend and your work schedule allows it, try to leave on Tuesday rather than Wednesday and plan to return on Saturday or Monday when the heaviest traffic will be off the roads. Limit your alcohol intake and remember, buzzed driving is impaired driving. Never get behind the wheel of a car if you’ve been drinking even a small amount. Plan on delays and give yourself plenty of time to get to your destination. Remember, being late is better than never arriving at all.